The stabbing of a police officer at Bishop International Airport in Flint is being investigated as a terrorist attack. 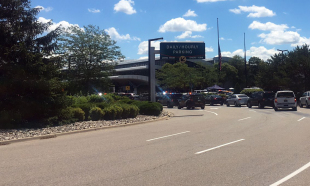 The airport was evacuated following the incident at around 9:45 a.m. Wednesday inside the airport along I-75 near I-69.

David Gelios, Special Agent in Charge for the FBI, says Lt. Jeff Neville was stabbed in the neck by a 49-year-old Canadian man who shouted the Arabic phrase “Allahu Akbar,” which means God is great.

As he stabbed Neville, the FBI says Amor M. Ftouhi continued to exclaim,”Allah”, and referenced killings in Syria, Iraq and Afghanistan — adding something to the effect of “you are all going to die.”

He was taken down by police and arrested at the scene.