Alarming mass die-off on California beaches — “Extremely high” number of sick and dead animals — Seabirds, sea lions, dolphins affected — Experts: Never seen this many sick birds — “How many have to die before somebody cares?” (VIDEOS)

CBS L.A., May 29, 2017 (emphasis added): Hundreds Of Sick, Dying Seabirds, Seals Found On Shores Of Ventura, Santa Barbara Counties… Elaine Ibarra, who works with the Santa Barbara Wildlife Care Network, estimated hundreds of pelicans and loons have died… she has never seen so many. “They’re very stressed out, and it is really hard to see something have a seizure and know there’s very little that you can do to help,” the animal care coordinator explained… Kyle Cory often walks on Silver Strand beach and sees the ill sea birds all the time. “I can see anywhere between 6 and 12 every walk. So there’s something going on,” he said. “It’s affected me in a bad way because it’s just not good to see on the beach.” He said he will keep documenting the dead wildlife he sees, hoping it’ll somehow help. “How many have to die before somebody cares?” he asked. 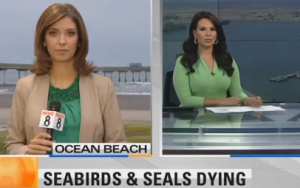 CBS L.A. transcript, May 29, 2017: “A disturbing trend off our Southern California shores… Hundreds of dead pelicans and other sea birds are washing up on local beaches.”

Huffington Post, May 31, 2017: Since at least April, dying marine animals and birds have been washing up en masse on the shores of Southern California’s beaches… sick or dead sea lions… loons, pelicans and even dolphins had also been found.

CBS 8, May 30, 2017: It’s become an alarming sight along the Southern California coastline. Wildlife experts report that it’s normal to see some dead wildlife this time of year, but they’ve never seen this many sick birds… The dead pelicans and loons can be seen up and down the coast… “That could be from temperature, runoff, we’ve had a lot of rain this year, so some people are speculating that it might have to do with the runoff into the water,” said Ibarra…

CBS 8 transcript, May 30, 2017: “Something in the water is causing a massive die-off along Southern California beaches. Dead and sick seabirds and seals are washing up from San Diego to Santa Barbara… It’s definitely an alarming sight to see… [Wildlife experts] haven’t seen quite so many sick birds before… The number of sick birds out there is extremely high… Experts are not sure of the exact cause of death.”

Source: Alarming mass die-off on California beaches — “Extremely high” number of sick and dead animals — Seabirds, sea lions, dolphins affected — Experts: Never seen this many sick birds — “How many have to die before somebody cares?” (VIDEOS)

6 comments on “Alarming mass die-off on California beaches — “Extremely high” number of sick and dead animals — Seabirds, sea lions, dolphins affected — Experts: Never seen this many sick birds — “How many have to die before somebody cares?” (VIDEOS)”