Gov. Brown Benefits If the Oroville Dam Breaks – Two Million People at Risk – The Inside Story

Posted on February 23, 2017 by Mountain★Republic 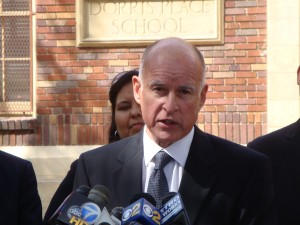 If the Oroville Dam fails and Gov. Brown has not initiated the mandatory evacuation order that Brown countermanded through the state agency, the Department of Water Resources and it will create the greatest natural (false flag) disaster in the history of the United States.

Please listen to my short video on the topic. You will not believe the allegation I put forth as I take off the gloves and expose Governor Brown’s true motives behind doing nothing to protect the people of Central California. I have taken the gloves off and all is being exposed. Brown needs the Oroville Dam to fail. His morality is on the same level as Hillary Clinton.

If you want to understand what is really going on in Central California and the Oroville Dam situation, this is mandatory listening. Please make this go viral:

Many of the articles on  this site have shown how dire the situation is.  The 2 million people between Oroville and Sacramento are in severe damage if the dam breaks.  There will be intermittent breaks in the weather, however, storm after storm is forecasted to be coming through the Oroville area.

Sacramento is already partially flooded and its levee system is failing. San Jose is now partially underwater with mandatory evacuations under way as I write these words.  San Francisco is threatened. The states largest dam, Shasta, is near capacity. The Oroville spillways are still not repaired as state officials are firing employees for posting photos of the damage to the dam because they are concealing how dangerous the situation is. Why would Brown’s people do that?

Until now, I have avoided playing politics because I wanted to keep the attention focused on the safety of the people between Oroville and Sacramento. Things have changed. Brown’s people have complete control and they are riding this horse to complete disaster. The dam may survive in the short-term, very few think the dam survives for much beyond that.

President Jerry Brown of the Republic of California

There is a strong movement to remove California from the United States and set up a new liberal republic and it is steadily gathering support.

Leading campaigners for the Yes California independence campaign say that a breakaway from the United States is every bit as possible as the unlikely victories for Brexit and Trump.

The movement, formerly known as Sovereign California, borrowed its name and logo from the Yes Scotland campaign after the 2014 Scottish independence referendum.

I recently interviewed Paul Preston on this topic and what I learned is that the Bank of China financially supports Jerry Brown. Brown is also financing this move through drug trafficking. I have a source within the DEA which confirms most of Paul Preston claims. Drug trafficking in northern California (e.g. Fortuna) is rampant and al-Qaeda is working in conjunction with the Mexican drug cartels in this endeavour and part of the drug profits are going towards a “dark money” support of Calexit.

As covered in previous articles, the embed sources at the CALEXIT meetings states that the Chinese (banks and covert military), La Raza, Mexican drug cartels, the Mexican Consulate, former Obama administration officials (eg Eric Holder, Loretta Lynch), and the movement opened an embassy in Russia in complete violation of US law.

The main obstacle to CALEXIT are the people from the State of Jefferson movement which is where Oroville is located. The area and its residents are the enemy of Jerry Brown.

In the way of CALEXIT Is The Great State of Jefferson

As many as 21 counties in Northern California and Southern Oregon are moving to secede/withdraw and join the state of Jefferson, the name of the intended 51st state. The movement has the support of local elected officials who are tired of the EPA trying to create dead zones of ranching and farming in this area. Once thought to be a pipe-dream, it looks as this may become a reality.

THE OROVILLE DAM SITUATION IS A DREAM COME TRUE. FOR THE CALEXIT MOVEMENT.  IF THIS IS NOT TRUE, THEN ASK YOURSELF WHY BROWN COUNTERMANDED LOCAL OFFICIALS’ ORDER FOR A MANDATORY EVACUATION.  LIVES ARE AT RISK AND BROWN DOES NOTHING. YET, AN EVACUATION ORDER CAN BE ISSUED BY SAN JOSE AND BROWN DOES NOT INTERFERE AND SUPPORTS THE EVACUATION. SAN JOSE IS LIBERAL AND SUPPORTIVE OF CALEXIT, OROVILLE AND THE NORTHERN CENTRAL VALLEY OF CALIFORNIA IS NOT.  A BLIND MAN COULD SEE THE PATTERN.

For the rest of the country, there are national implications. California’s destruction of the agricultural rich Central Valley will produce extreme food shortages for the rest of the country as the Chinese move in to purchase the decimated areas for pennies on the dollar. Remember, Paul Preston has established the financial support for CALEXIT, in part, comes from the Chinese.

This is the starting point of the American civil war. I have held this back until now because, as  I said, my focus was on public safety.It is now time to take off the gloves. The main forces behind Brown are controlled by Soros and the United Nations. Paul Preston has discovered than a CALEXIT will be a protectorate of the United Nations. This will be the impetus for the breakup of the United States.

It is now time to take this issue firmly into the national spotlight and expose Gov. Brown for the morally depraved man that he is.  I believe that enough public pressure can be brought to bear in order that the Trump administration will act and Brown will be forced to back down. There are 2 million people that need your help. Make this a political issue of the highest priority.

3 comments on “Gov. Brown Benefits If the Oroville Dam Breaks – Two Million People at Risk – The Inside Story”